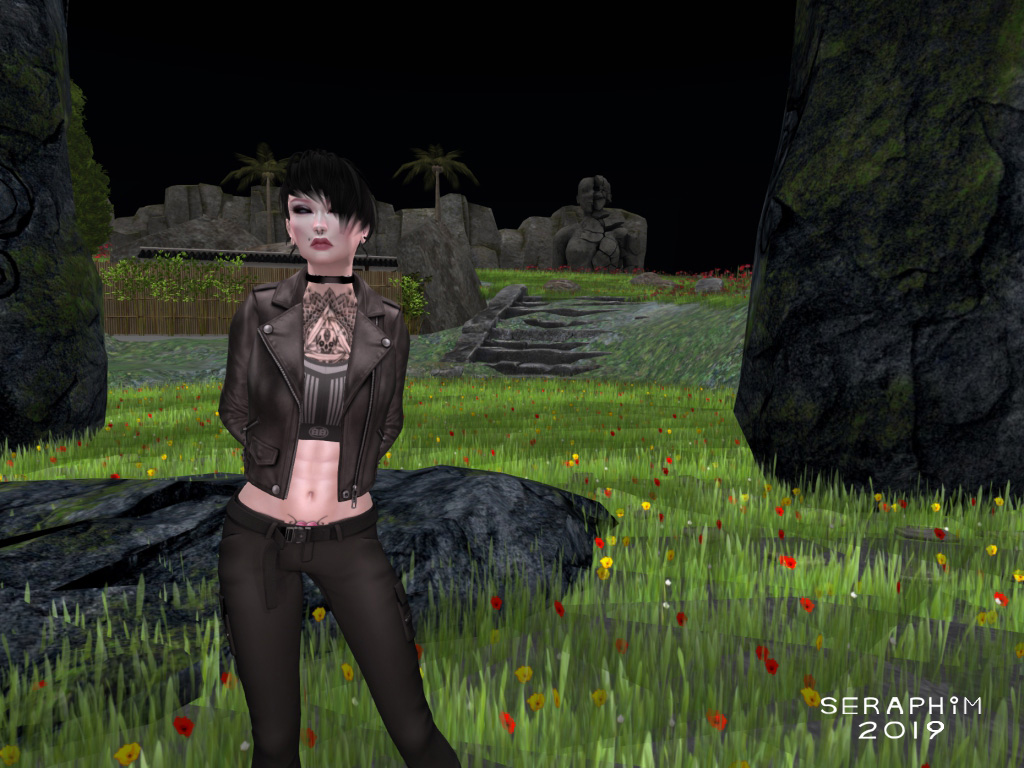 Seraphim had just started decorating one of her awesome rentals in the Maine development, had literally only hung two pictures, when she received notification she had been evicted from the rental! As she read the eviction notice in disbelief, she received a second notification saying she had been evicted from her other recent rental in Maine, as well. There was no explanation. These notices were followed by an avatar paying the one months rent she had payed for each rental, minus one day for each, into her account… still, no explanation.

Seraphim immediately IM’d the avatar, asking why she had been evicted. He sneeringly replied that there had been a mistake, the places were not, as advertised in their rental vendors, L$50 a week, with 200 prims, but L$2500 a week, with 1000 prims, and that Seraphim should have known the prices were wrong, and contacted him before she rented the properties.

Seraphim has previously rented several properties, and currently rents one… she rented all these properties using the ubiquitous SL rental vendor in front of the property, for the sum the vendor asked… that’s what they are for, isn’t it? She’s never had to contact the owner and ask if the vendor is asking the correct price… what point is a vendor you can’t rely on? Whenever she has had to contact an owner, the interactions have always been pleasant/reasonable. She has never had a problem… till this happened.

This incident is pure wrong on several levels. Firstly, Seraphim did nothing wrong! She payed one months rent, the sum asked, in advance on both properties, thus conveying her desire to rent the places for at least that period, and to be part of what seemed a lovely venture… she did this in perfectly good faith… presumably, a new community, advertising itself as wonderful and inclusive and wanting people to commit to it, would value such an indication of commitment. Secondly, the little man Seraphim was evicted by made the mistake/s in pricing, not Seraphim… to evict her with zero explanation, then, when she requested an explanation, to actually imply she was at fault… this is appalling people skills for someone attempting to start a happy community!

Thirdly, what a repulsive piece of lack of good will! Couldn’t the little man have, first, contacted Seraphim, and explained his mistake, perhaps giving her some options? Could he not have then, because of Seraphim’s obvious good faith, at least given her all her money back? Could he not, in short, have acted as though he gave a rat’s ass about her obvious desire to rent there? Instead, he evicted her without explanation/warning, then blamed her for believing the advertised price… Donald Trump would be a better PR person for this venture!

Seraphim is just one avatar in SL, she does not have much influence, but this little big-man has completely turned her against the Maine community venture… those bizarre clouds she first noticed there were an omen of the hidden ugliness in the place… the place is clearly about making fistfuls of Lindens, and absolutely nothing about creating a genuine community… it looks good on the surface, but with people like the one Seraphim just dealt with running it, how can it be anything but expensive real estate with no soul?

In RL, there is no way Seraphim could have been evicted for paying one months rent, at the asked-for rate… of course, SL is not RL, but it’s economy is supposed to follow basic RL rules of engagement, tiny little despots shouldn’t be able to behave like this. If you pay for a service, the seller should not be able to simply snatch that service back because they made a mistake, especially with zero explanation. Seraphim does not hold much hope, but she has contacted LL, asking if she has any recourse against being evicted with no explanation for doing nothing wrong. She suspects LL will not help, and this does tend leave a bitter taste.

After reading this post, Seraphim, inspired by the gorgeous photographs, decided to have a look for herself. The first thing that struck her, after landing on the beach, were the strange clouds… she’d never seen these in SL, before. They were obviously some extra layer of ‘weather’ added on to the sim… they looked great when the sky was clear, but clashed with the SL clouds, and seriously clashed with certain types of tree, causing them to appear in front of the tree, which was just plain weird…

… odd clouds aside, the sim was beautiful, full of a wide variety of high-end buildings…

… which is why she couldn’t resist renting 1 Lois Lane! Most of the time Seraphim was looking around, she was talking to the only other avatar in the sim, who had also come here after reading Alexa’s post! Emelia also was blown away by the lovely sim, and the low prices, and she, also, rented a place. Seraphim invited her for a tour of her new rental… 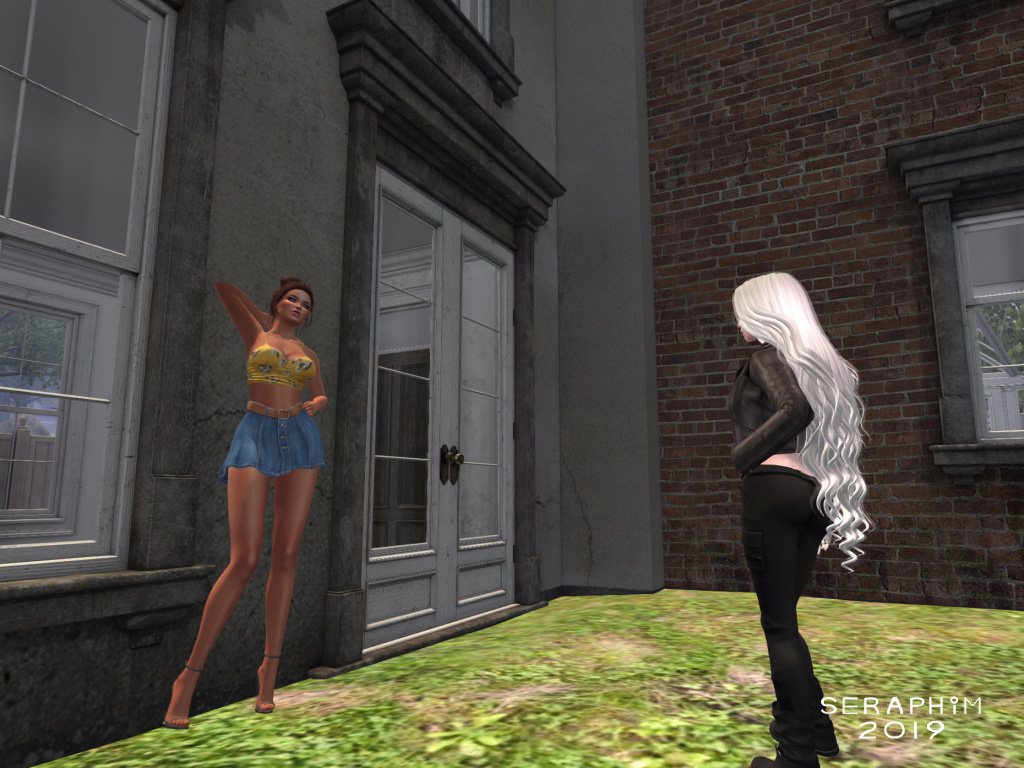 … of which Emelia was suitably impressed. The two talked for a while, then Amelia had to go, leaving Seri to wander around some more, until… 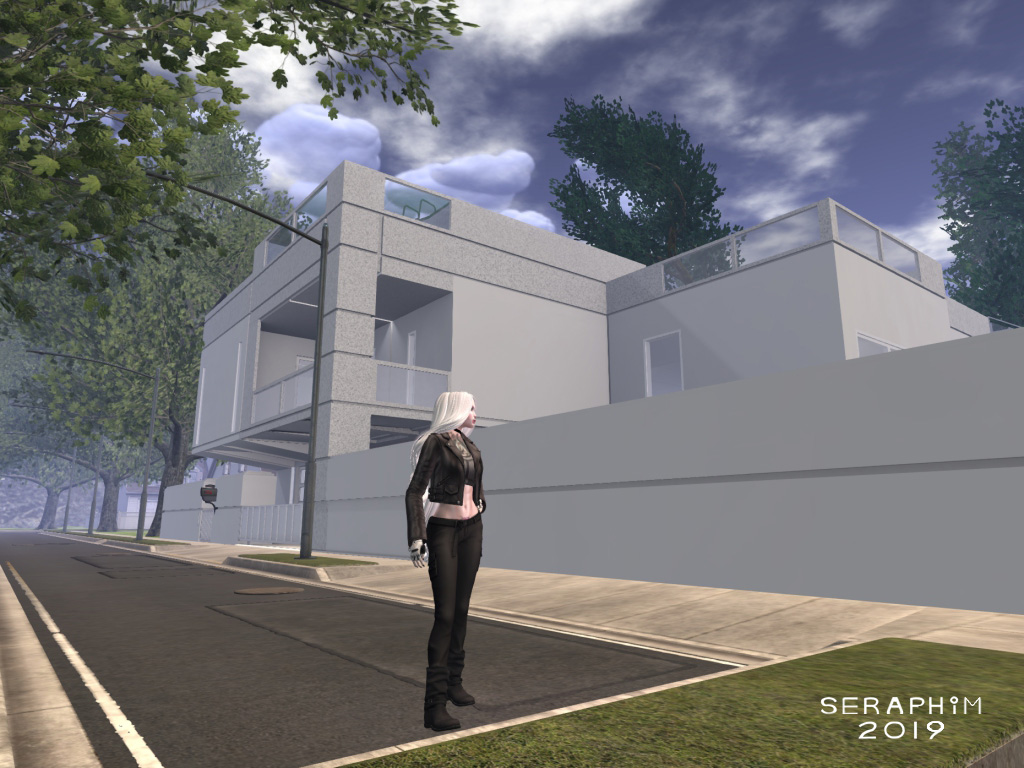 … she found THIS fabulous place (16 Pearl Place), also only L$50 a week! What was a girl to do, she’d hate for this lovely sim to vanish for want of clients, so she rented it, too!…

… she’s really looking forward to decorating them both, but especially this one, as the internal space is very gallery-like, just what our girl loves most (: 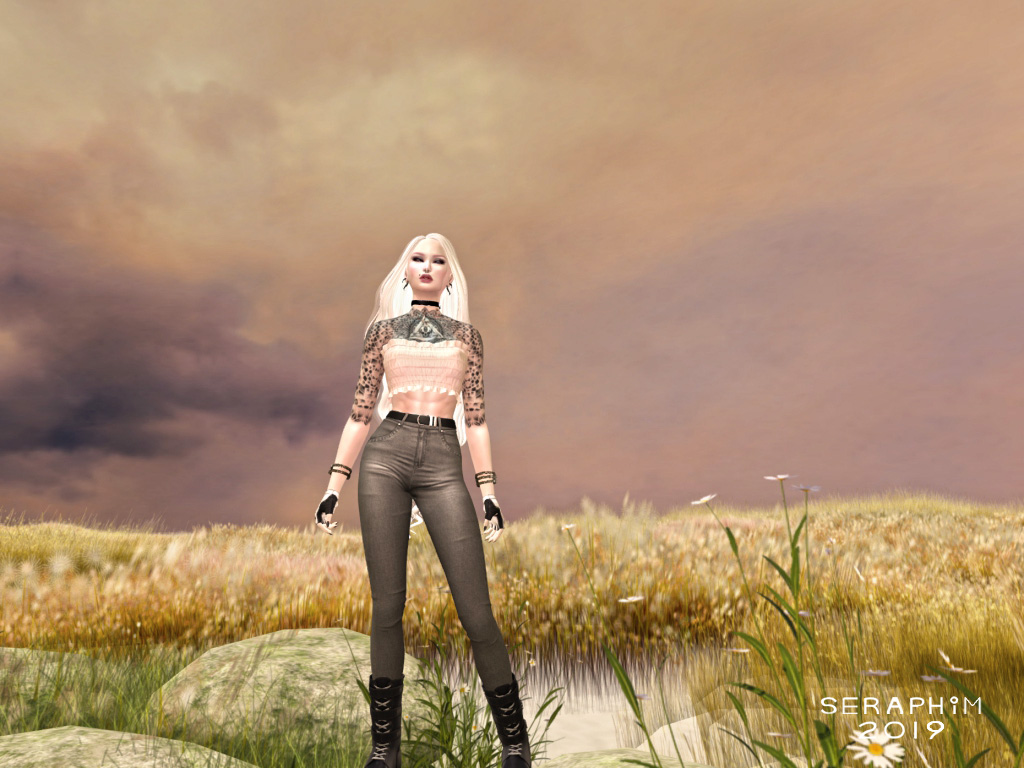 … the sim is beautiful, with a pond, a train, and various buildings…

… but it was the stunning sky…

Seraphim visited FaNg Sanctuary Island, today. She expected a dark, goth/vampire type place, and that’s what it was, initially…

… it’s billed as the ‘best swamp in Second Life’, so Seraphim headed away from the castley bits, looking for the swamp area… she’d set the recommended windlight, and really liked the old master, oil paint-like colours the light highlighted. She found the swamp, but kept going…

… the forest, in it’s rich, oil-colour hues, was beautiful… she kept exploring… 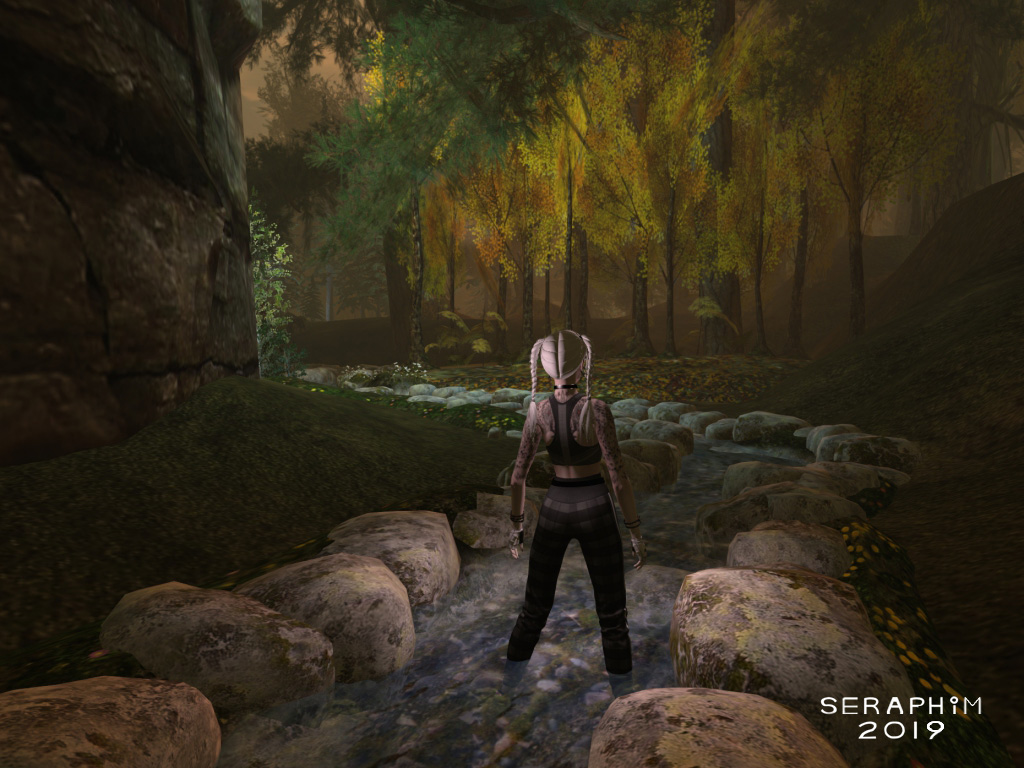 … the place was gorgeous, in a dark kind of way, as if Hansel and Gretel might come round the bend in the trail, having just escaped the cannibal witch…

… but that didn’t happen, she had all this beauty to herself. 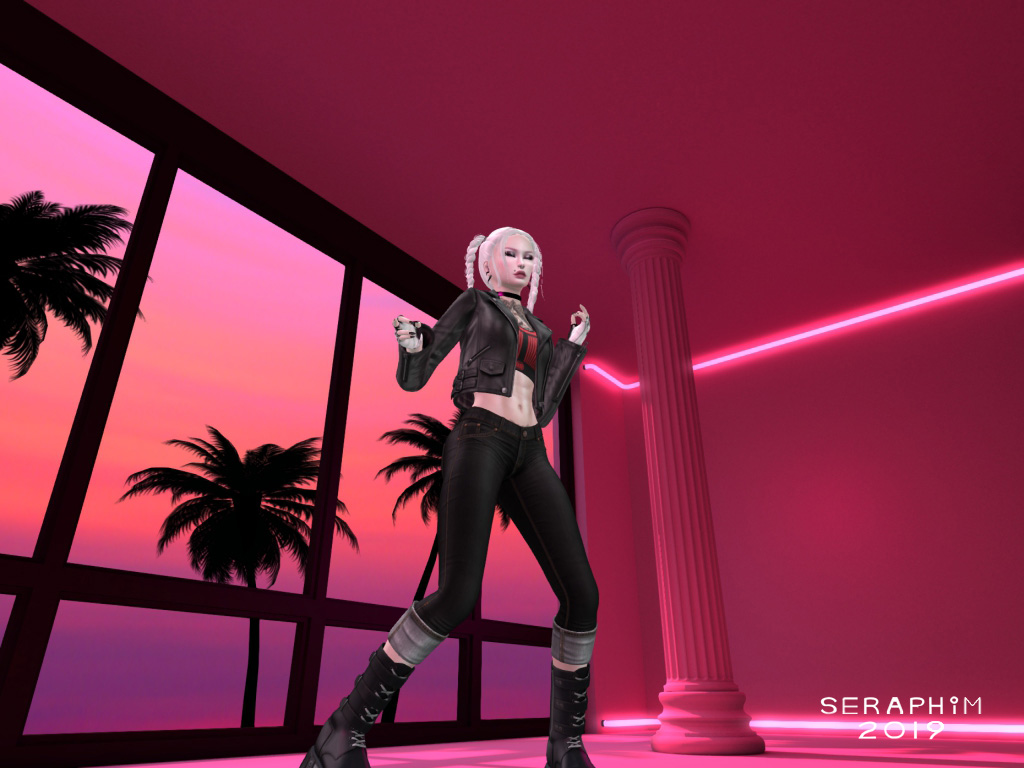 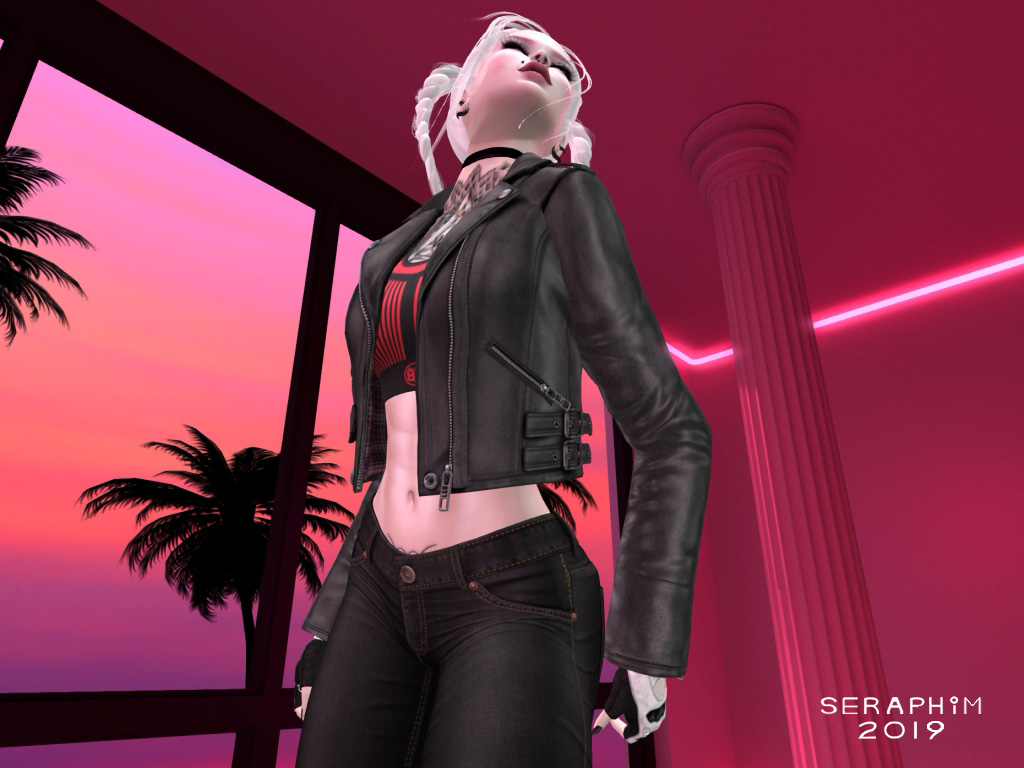 … and it makes her feel wonderful…

… so she’s just a dancing fool… 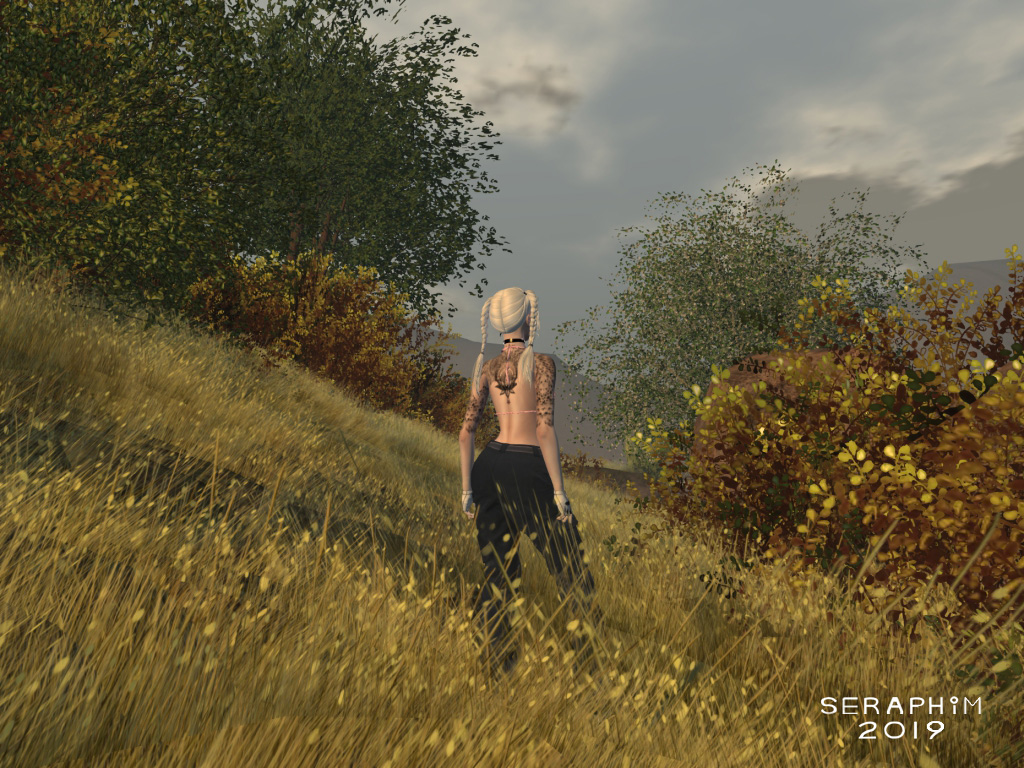 Whenever Seraphim visits an ‘event’, if there is one, she always checks out the surrounding area, ever the explorer… she visited the ‘Flourish’ event, this morning, then checked it’s surrounding landscape… which was a beautiful gem called ‘Cooper River’. The uplands were quite lush, in a dry, desert-palette way…

… but the lowlands were just plain empty…

… in a beautiful, desolate kind of way that spoke of dead-end stories… 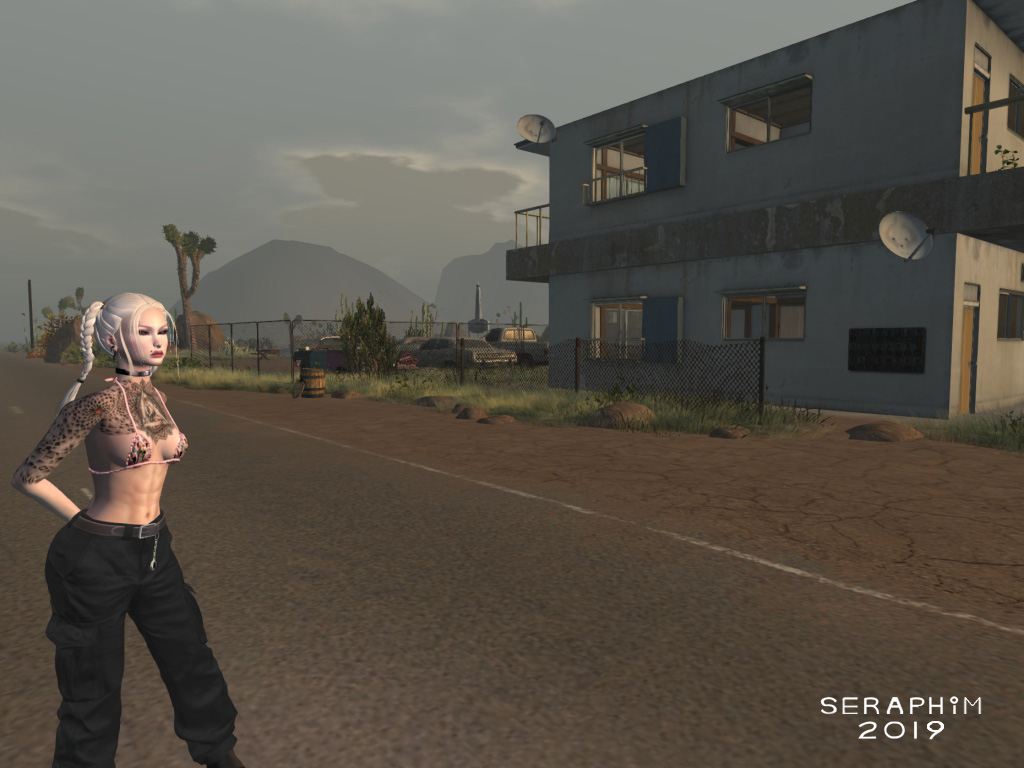 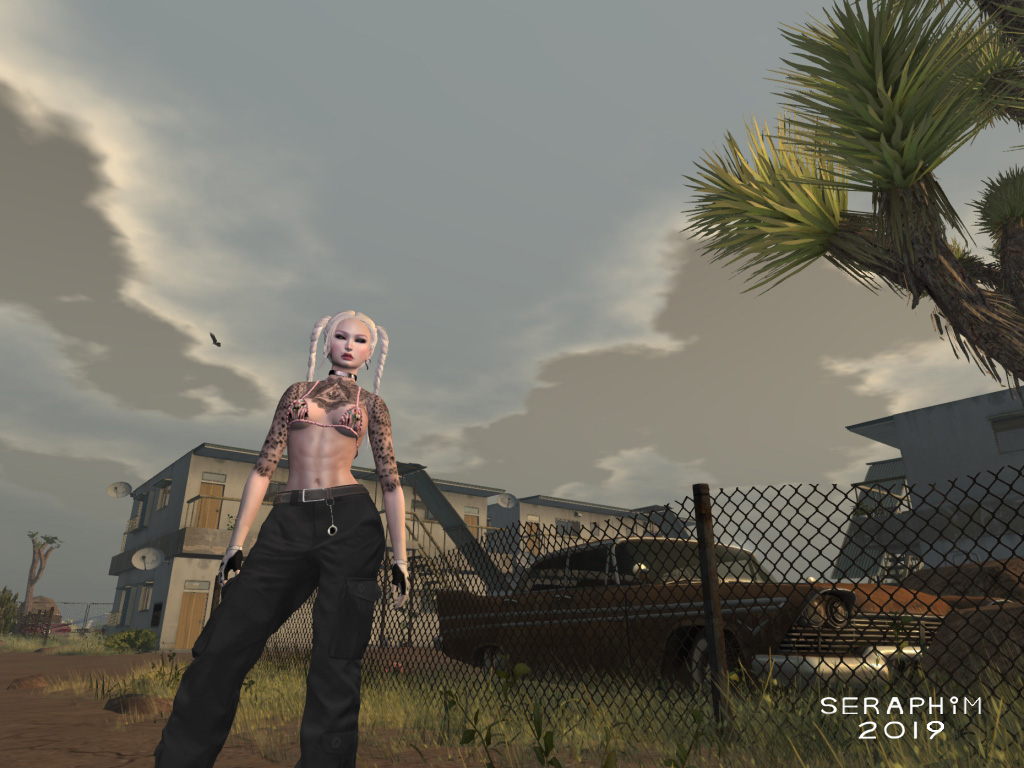 … in a place everyone would rather forget.